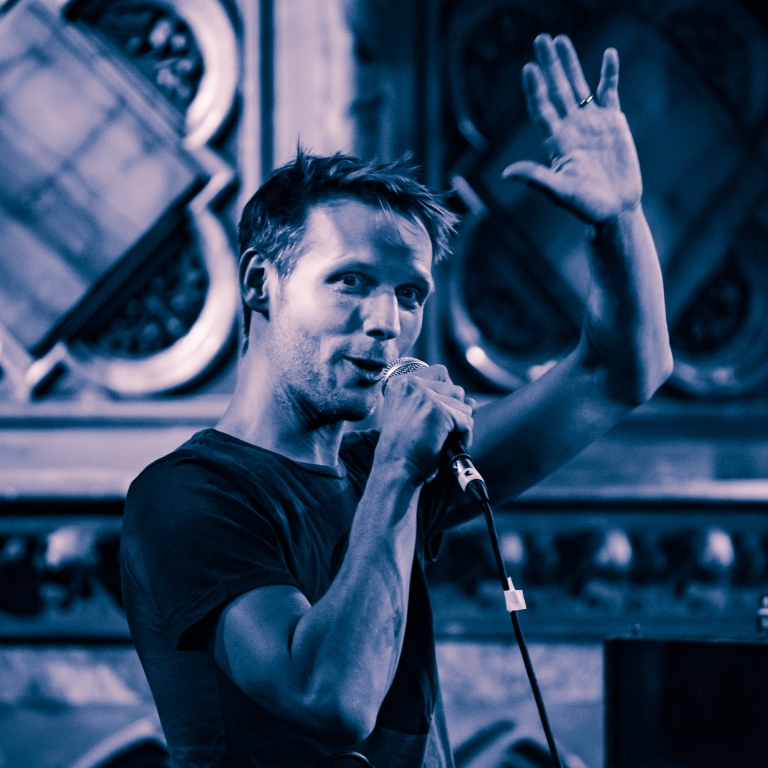 Leaving aside the cake, strudel and tiramisu one of the great pleasures of Daylight Music at Islington’s Union Chapel is hearing artists who are either starting out or that don’t easily fit existing industry templates. For example Daylight brought together Max Richter and the late Johann Johannson on the same bill as long ago as June 2008, while Nils Frahm graced the Union Chapel stage as early in his career as May 2010. Daylight Music has consistently supported innovative genre fluid music and this summer Henning Fuchs, a former composer-assistant to Richter, showcased his forthcoming ‘A New Beginning’ album accompanied by the Siren Strings. What follows is taken from an e-mail Q&A with Henning Fuchs from September 2018.

Fuchs a performer since the age of 14, started out as a singer-songwriter yet found that a growing interest in instrumental, film and classical music led to him studying film music at the renowned Konrad Wolf Film University of Babelsburg in Potsdam. Further study at the Royal College of Music in London followed before in 2012 the link to Richter came about when his film school e-mailed to say that:

“… ‘a very busy composer’ is looking for an assistant…. At this time Max lived in Berlin and wasn’t very well known in Germany. In the beginning it started as a part-time-job, but which later became full time. I was involved in every project that came along in the following years – it was great fun and a lot of work! When Max decided to move to England they asked if my family and me would like to join them. In England the work continued as usual [and] I became involved in a few more ﬁlms and of course in “Woolf Works“ – which I am very happy to have been part of. I simply love the work of Wayne McGregor!”

The job of composer-assistant was extremely open ended, but Fuchs reflected that it had been beneficial to his own work that followed:

“…the job of an assistant is to cover the composer’s back in every situation and under all circumstances. You support your partner the best you can and handle everything that might distract him/her from being creative. Technical issues are just as important as musical know how and social communication. As a result you might end up doing less creative things. But you learn a lot. Since your main task is to manage and deal with problems you eventually become very efﬁcient in handling tricky situations. My work ﬂow increased massively through this job.”

Family reasons led to Fuchs returning to Berlin after a year in England where his CV included assisting the Danish composer Karsten Fundal on Ai Weiwei’s ﬁlm “Human Flow”. For many this supporting role would suffice, yet the most creative among us are often driven to make a personal mark or contribution to their chosen field – an impulse that in this case led to the excellent new album “A New Beginning”. Attendees at the June 2018 Daylight Music gig were able to buy a pre-release CD-R of this magnificent music, which is at the time of writing unlikely to see an official release before Spring 2019. Fuchs explains:

“Through my studies… and by assisting other composers… I felt I was bringing too little creative output into the world myself. So, when we moved back to Berlin it was a new beginning for me in many ways. Previous albums that I produced were always full of compromises, [but] “A New Beginning” is 100% me – no compromises… I write music because I want to hear something new. As a teenager I wrote songs about my personal feelings. Mostly sorrow… Whenever I discovered that someone else like Kurt Cobain or Jim Morrison had already written a song about the topic I didn’t see why I should write another song about this. I was glad, that someone had been there already and was able to soak their lyrics and music in. So, if everything that I want to hear is already there and has been written – I don’t need to write it! But often things I feel haven’t been written in the way that I need. That’s why I write!”

“If I need inspiration… there is an analogue slide projector in my writing room. While working on ‘A New Beginning’ I sometimes put photos on, that I had shot in the past. Visuals and memories help me triggering certain kinds of feelings that eventually ﬁnd their way into the music.”

One of the themes of the album is impermanence, the final track and epilogue of the album ”Zerfallene aus Sand“, literally ‘decaying to sand’ but perhaps colloquially ‘in the end we are all dust’. Fuchs elaborated:

“Sooner or later we are decaying to sand, falling from one side to the other in a never ending looping hourglass. Our shape disappears but the energy continues and eventually transforms into new shapes. There is no such thing as death. The end of a life always is a new beginning of something else…”

“Impermanence” is also the title of a four track EP, released in August 2018, that features two remixes of two tracks from ‘A New Beginning’ which for now is the only way to hear some of this wonderful music. Links to the usual Spotify, Apple Music and iTunes platforms can be found at end of this article. Negotiations for a full release of the album are ongoing at the time of writing, with the target date being Spring 2019.  Of course the idea of ‘A New Beginning’ is just that – a starting point for future creative endeavour. As befits an artist on the rise Fuchs is in no danger of standing still, having multiple projects underway that include having scoped the concept for the next album:

“I have just ﬁnished work on a short ﬁlm… and started writing music for a documentary about Palestine & Israel [that]… combines Arabic and far eastern elements. In terms of song-writing there is a German-Austrian co-production in process with my old friend Calim (calim.at), where we are planning to release one song early 2019. In addition I am coaching another friend, an actress for a tv movie where she sings and performs guitar & piano and am also writing songs for this production. Once the album is in good hands, I will be able to start working on the next one. The concept for it is already written.”

As all this implies the creative life is never straightforward, so it seems fitting to end with Fuchs reflections on how he overcomes the challenges: